For agency principal Stephanie McLaughlin and her husband

Scroll down for narrative. 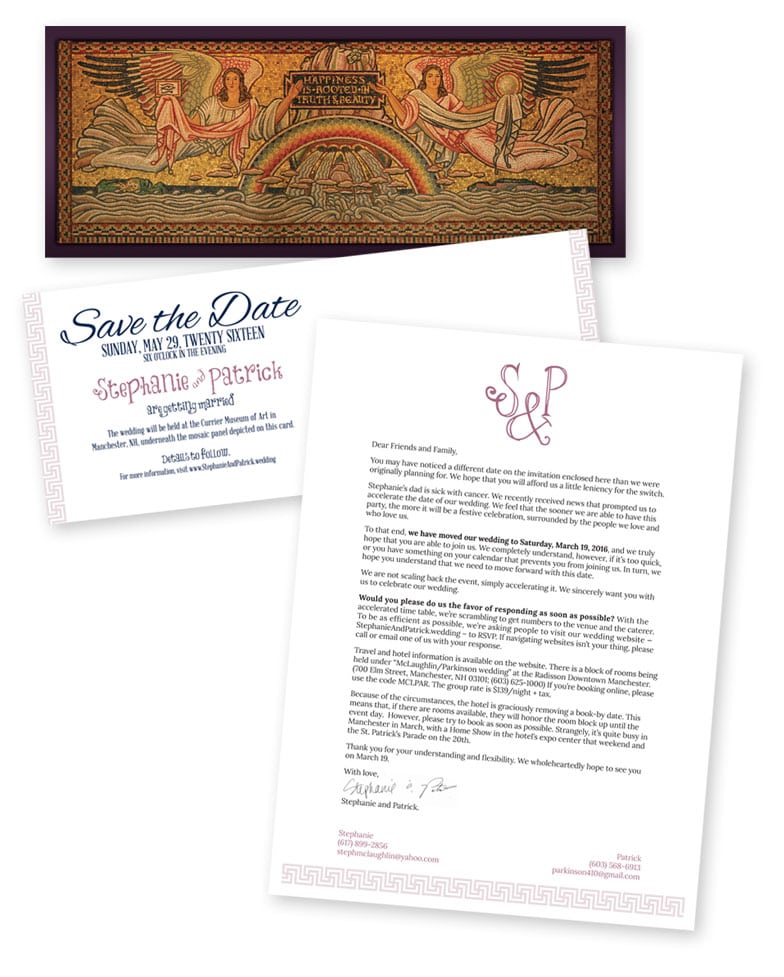 Stephanie and her fiancée Patrick were planning a wedding for Memorial Day weekend, 2016. As the principal of a marketing agency, she built a little time into the production schedule for she and her friend and designer Janna Hartley to build a website for the occasion. They thought it would be fun. However, the project took a turn for the serious when Stephanie and Patrick rescheduled the wedding from May to March to accommodate Stephanie’s father, who was sick with cancer.

On February 20, after receiving news about the treatments, a decision was made to reschedule the wedding to March 19, at which point a small team jumped into action to pull together a wedding in 29 days. Neither the wedding, nor the guest list were scaled back, simply accelerated. The first wedding for both Stephanie and Patrick, they still wanted the full affair; they just wanted it with Stephanie’s dad in attendance.

Save The Date cards had gone out for the original date about a week before the decision was made, so a letter was written and mailed – along with a quickly-developed invitation ­– to everyone on the list explaining the change.

Because of this change, the website took on a role of even greater importance. With the wedding in three weeks (by the time invitations were received), the bride and groom requested RSVPs be made online.

Stephanie’s parents moved into a home a block from what was then the Currier Gallery of Art in June 1984. Within about six months, Stephanie’s dad suggested to her mom that they become members of the Currier and, prophetically, said it might come in handy if they wanted to hold a wedding there someday.

Stephanie’s favorite thing at the Currier Museum has always been a two-story mosaic doorway that’s now the main feature of the Winter Garden café. Once the main entrance of the building, the doorway is now enclosed in an open, airy space at the center of the building.

Stephanie can’t quite articulate what it is about the doorway that is so captivating to her, but isn’t that the way it is with art: There is no reason.

The mosaics were a commission by Italian artist Salvatore Lascari that depict The Arts: the left panel symbolizes the pagan arts of the Classical world and the right panel represents Christian art. The panel above the doors is called “The Fountain of Inspiration,” and features two angels floating on clouds reaching for the words “Happiness is rooted in truth and beauty.” 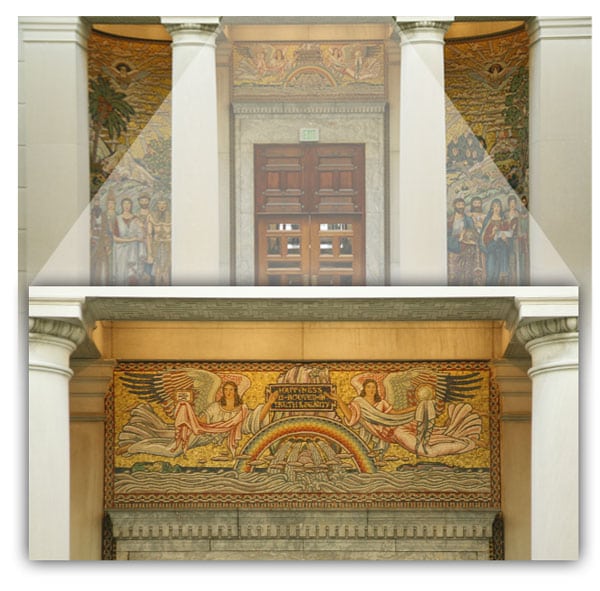 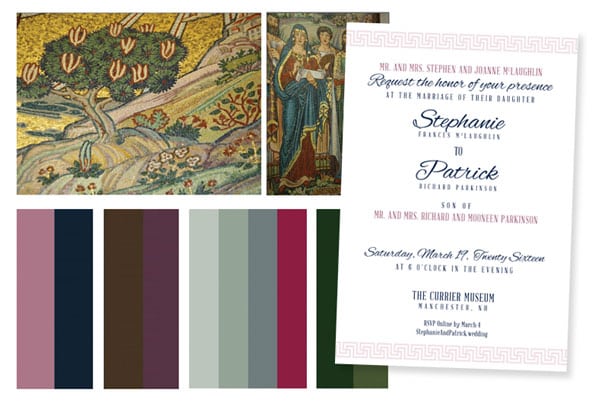 Fittingly, the mosaic provided the inspiration for the entire wedding. The original save-the-date cards were a depiction of the top panel; the invitations and all the printed materials included the Greek key engraved above the doorway. The colors and the feeling of the event were pulled directly from that mosaic, as if the scene spilled off the walls and into the room itself.

The evening’s reception was held in the Winter Garden, where Stephanie’s favorite piece of art became the centerpiece of the entire, magical, perfect event, with the characters of the mosaic doorway presiding over the evening’s festivities. 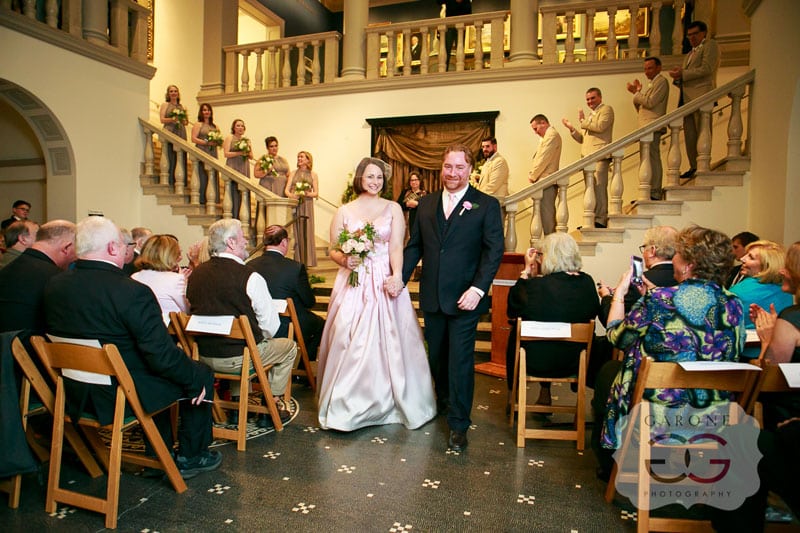 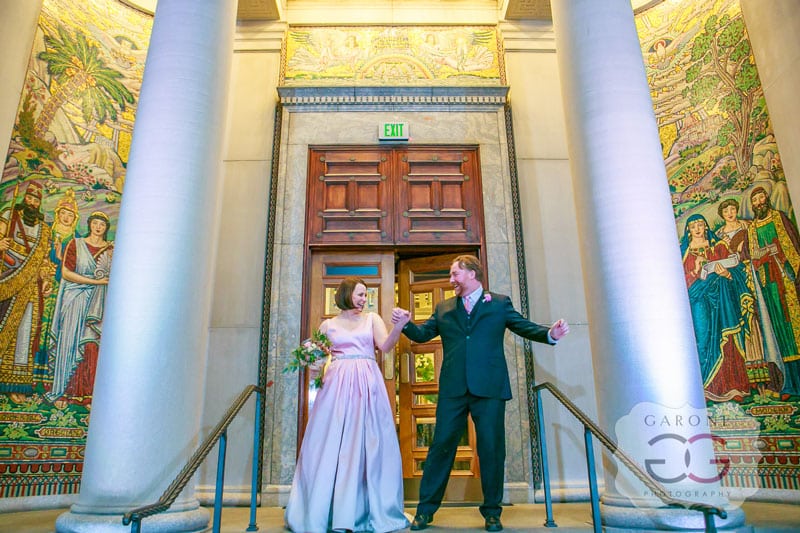 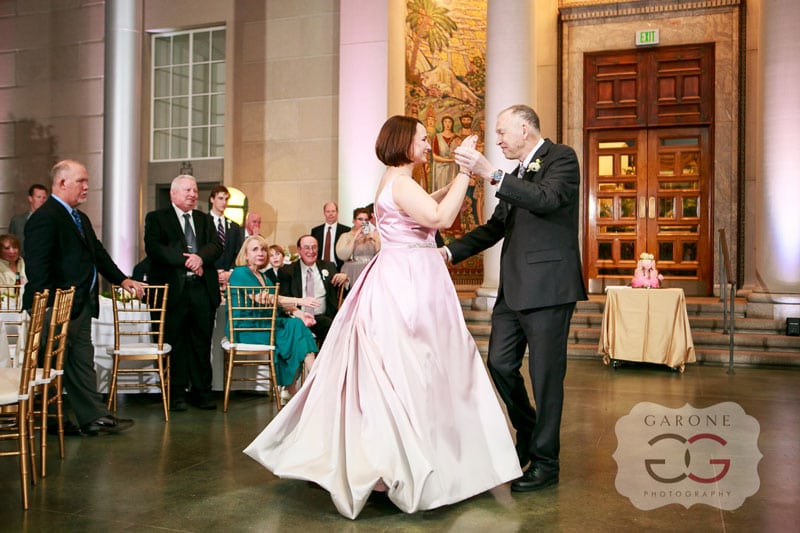 The one-page WordPress website was built using The Fox theme. The Fountain of Inspiration panel was animated and used as the hero image of the website, providing consistency with the imagery invitees had seen on the original save-the-date cards and that guests would see at the event.

The site included the inevitable meet-cute, a gallery of pictures of the happy couple, and information about the festivities over a scrolling parallax image. Information about accommodations and the online RSVP form preceded introductions to the bridal party. And the bottom of the site included several “testimonials” of the couple from friends and relatives.

Ultimately, the wedding website was more than simply functional. It looked professionally made (which it was!) and truly represented the couple, snark and sass included. The website also provided visual consistency with all the other wedding materials and the event itself, which is precisely the kind of thing you’d hope to see from a marketing agency principal!

We believe that the StephanieAndPatrick.wedding website played a big part in the success of the event, considering the circumstances, and Stephanie will be forever grateful to her friend and designer, Janna Hartley, for making it happen quickly and beautifully. 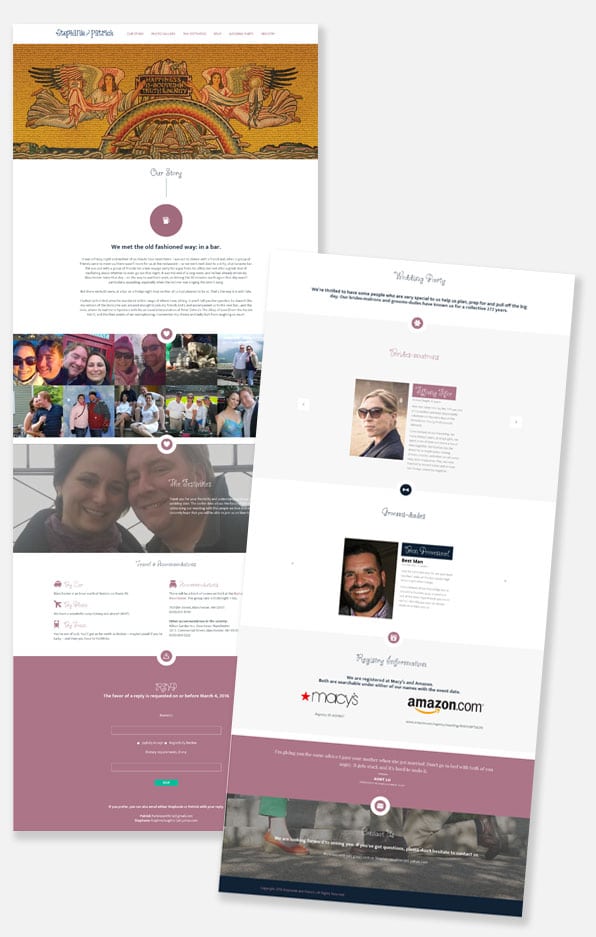