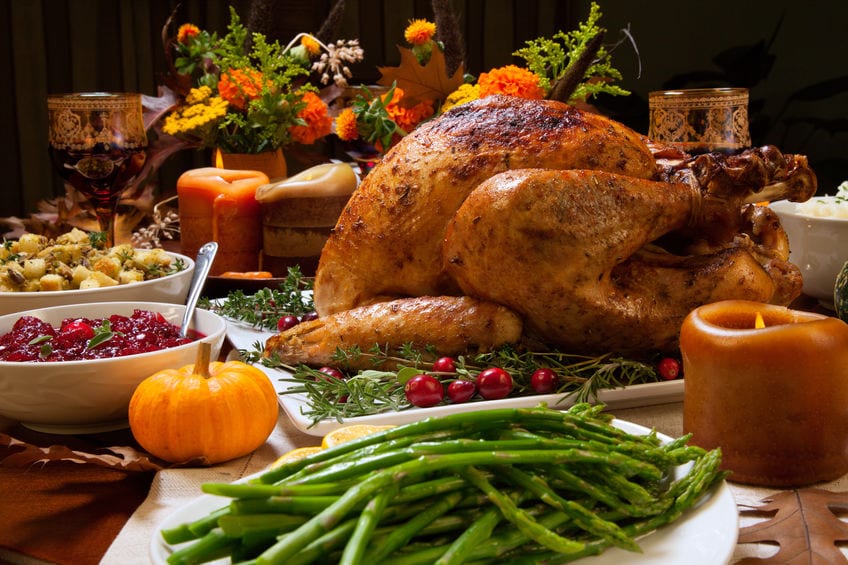 For our Thanksgiving blog post this year, the Savoir Faire team dug deep into the memory banks to recall what has made this such a special holiday for us all over the years – not including the turkey, gravy, potatoes, green bean casseroles, pies… we could go on forever.

This isn’t a food-themed blog, though, so instead, please enjoy a sampling of Thanksgiving with Savoir Faire:

My mémère had the best turkey gravy recipe and process ever! I remember my brother Ben hanging out at the stove with her for a couple of Thanksgivings, learning the art form. My mom has the magic touch, too, and my husband says it’s the best gravy he’s ever had.

Not every year, but some years, my dad would bust out the “What are you thankful for?” question, and we’d have to go around the table and think of something to be thankful for — before we could eat. When we were younger, one of my brothers or I would make some wiseass remark as our contribution.

You have to know a little bit about the movie “Pulp Fiction” for this one. There’s a scene where Vincent and Jules are in the diner eating breakfast, and they have a conversation about pork. It goes, in part:

JULES: Hey, a sewer rat may taste like pumpkin pie, but I’ll never know ’cause I wouldn’t eat the filthy motherfuckers.

You also have to know that my dad was a master at employing movie lines in the course of daily life. Once, my mother served him a piece of pumpkin pie (not his favorite, which was apple) after Thanksgiving dinner. She then asked him how it was. And, he said, (I swear this is true): “It tastes like sewer rat.”

This put me in hysterics because I knew what he was saying. But, my mom, who had done all the work to pull off a Thanksgiving dinner, didn’t immediately see the humor in it. Her family members, who are neither “Pulp Fiction,” nor movie dialogue-quoting kind of people, were horrified, which actually made it funnier to me and my dad.

When I think of Thanksgiving, recent celebrations, which have gotten smaller over the years, don’t really come to mind. My memories of Thanksgiving involve going to my aunt and uncle’s house many years ago.

They hosted their kids, grandkids and parents, and they hosted my family as well. We always arrived a little late because my parents owned a convenience store that they didn’t close until the middle of the day, staying open for customers who needed to pick up a last-minute bottle of wine, six-pack of beer, box of stuffing or can of cranberry sauce.

My aunt kept the food warm and made sure there was plenty of Italian wedding soup for us.  While others finished their last bites before dessert, my aunt was busy setting out plates for us. I remember looking up over their bar and seeing the photo collage my aunt updated every year with the new school photos of my brother and me. You couldn’t help but feel how much love was at that table.

It was Thanksgiving 2014. We were hosting Thanksgiving at our new home for the very first time. Then, the Noreaster hit! We were still determined to have this holiday. I had an entire meal planned. The turkey was ready to go, and then,.the power went out and was out for days!

We bundled up, packed all of our food and got in the car to travel to my dad’s, which was an hour away. It was me, my husband and my sister, who was visiting from out of state. They had power and a generator if we needed it. It wasn’t what we expected, but it was certainly the most memorable!  We realized, more than ever, even through the chaos, it truly was about being with family and we had so much to be thankful for.

I used to go to my grandmother’s house when I was a young lad, and my entire extended family would be there from my Mom’s side. This amounted to quite a large number of people, and I always remember those as being some of the best moments of my childhood.

I loved seeing all of my cousins. Playing poker with the family was a blast. Plus, my grandmother had a large, farm-style house and there were lots of nooks and crannies to explore  and get lost in.

I loved reading everyone else’s stories about fun family memories. When I think of Thanksgiving, two things come to mind. One, while living in the Bay Area, we hosted Thanksgiving five times for “orphans,” friends and friends of friends who didn’t travel to see family that day. The Bay is packed with transplants, and it’s not cheap to fly over that weekend!

Our townhouse was tiny, but we managed to cram a table to seat more than a dozen people into our kitchen. The cast of characters varied each year, but for those few hours over turkey and lots of wine, those folks were family.

The other thing that I immediately think of is that time on Thanksgiving where I went down for the count with a nasty bout of bacterial spinal meningitis. It’s the 20th anniversary of that Thanksgiving!

I don’t recall too much from that actual day, but I know I was at at least three different meals with family and friends, sharing utensils for plates of pie. I was in college and didn’t realize that college-age kids were at a high risk for meningitis.

By that evening, I was feeling yucky and went home early to nap, before the planned Black Friday shopping at dawn.  That’s the last thing I remember before coming to in the hospital a week later.

In the days and weeks following Thanksgiving, I truly understood what the holiday was all about, as I saw my friends and family rally around me at all hours, doing whatever they could to make sure my recovery was a success.

It was scary for them, but as it’s now been many years, we can joke about it. (Oh, and a special thanks to my sister who knew how to react to an emergency, getting an ambulance there for her catatonic brother and helping the EMTs put on my clothes and load me onto a gurney. She reminds me often that I owe her my life. I do.)